Drs. Sabato Santaniello and Bin Feng were each awarded a CAREER award from the NSF. 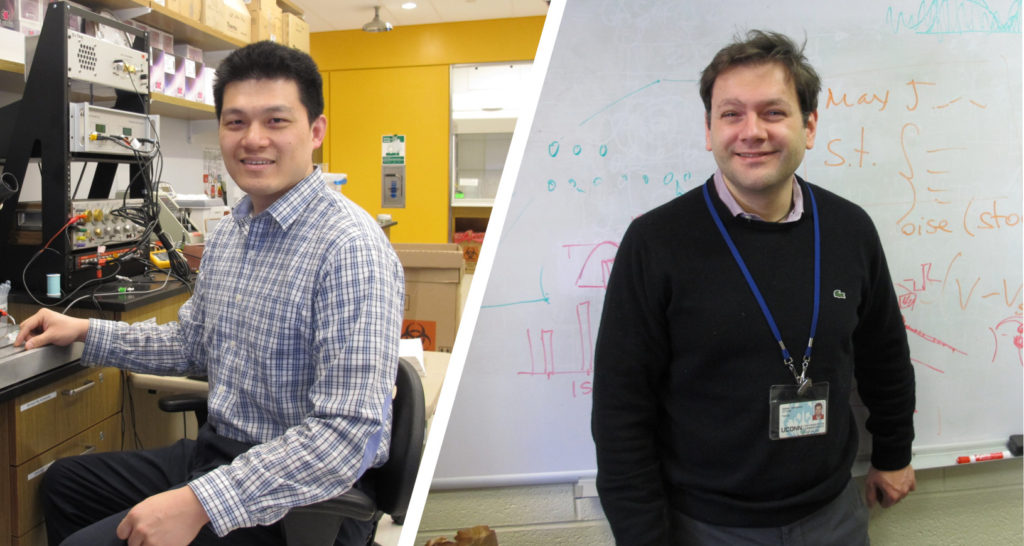 Drs. Sabato Santaniello and Bin Feng were each awarded a CAREER award from the NSF. They are the first two CAREER awardees (home grown) from our BME department.

Dr. Sabato Santaniello’s proposal is entitled “Robust Identification and Multi-Objective Control Methods for Neuronal Networks Under Uncertainty.” A short summary of his funded study is provided below:

The control of biological neural networks underpins the development of minimally-invasive brain therapies as well as adaptive learning for cyber-physical systems, but it remains challenging because of the irregular dynamics involved. There is an urgent need to determine the impact of unmodeled dynamics on the controllability of these networks and develop robust controls accordingly, otherwise controllers will remain underperforming, fragile, and hard to calibrate. This is the case for deep brain stimulation (DBS), which follows a conservative “one-size-fits-all” paradigm and remains underutilized despite having the potential to treat millions of people worldwide. The objective of this program is to develop identification methods that estimate the impact of unmodeled dynamics on neuronal circuits and a robust control framework for these circuits. Brain circuits targeted by Parkinson’s disease and DBS are considered to maximize the impact of the research. The work is paired with educational plans that address current limitations in the training of neural engineers and broaden the presence of first-generation college students in STEM.

Dr. Bin Feng’s proposal is entitled “Understanding Peripheral Neuromodulation to Enhance Non-drug Management of Chronic Pain.” A short summary of his funded study is provided below:

Chronic pain, a prevalent and costly disease (~$600 billion annually in the US), is managed primarily with drugs, the most widely used being opioids and their derivatives, which affect both peripheral and central nervous systems (PNS, CNS). Opioids’ unintended effects on the CNS lead to adverse side effects like dependence and addiction, whereas peripheral neuromodulation (physical stimulation of PNS tissues) alleviates pain with few side effects. Thus, the proposed research pioneers a mechanistic understanding of peripheral neuromodulation for controlling pain by combining new single-unit recording methods with a novel multi-scale modeling framework. The proposed research will significantly advance peripheral neuromodulation as an engineering-based alternative to managing pain and will allow this non-drug treatment to benefit more chronic pain patients.